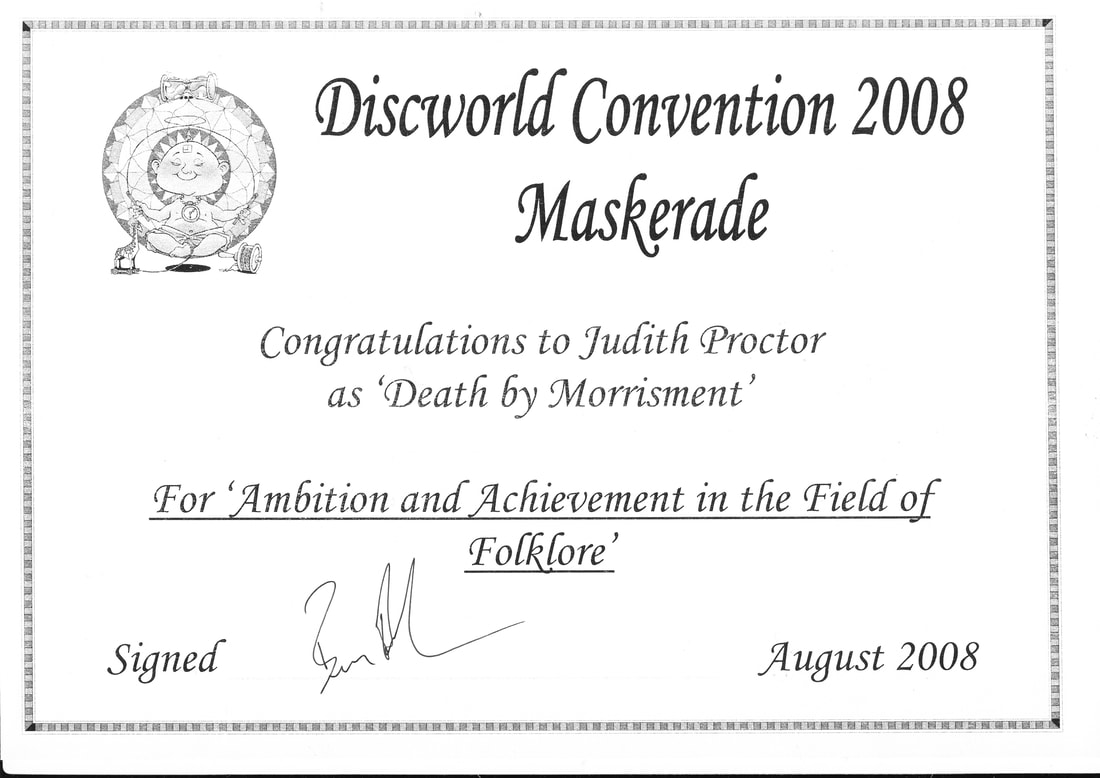 How did Southern Star begin?
It's all Terry Pratchett's fault.  Honest!
As many of you will know, Terry Pratchett was author of the popular series of 'Discworld' novels.  Every other year, fans of these novels get together for a convention.  Four days of cheerful silliness (and occasional bits of serious stuff) inspired by the novels.
The Discworld books also include a wonderful array of guilds and trade organisations, such as actors, butchers, magicians, artificers, beggars, rat-catchers and assassins, to name just a few, and one year, the organisers of the Discworld convention decided to divide their members into different guilds, just as a way of creating teams for competitions, etc.  Little did they know what they had unleashed!  Fans got into this in a big way, they became wildly creative and the guild tradition became a roaring success and was repeated every convention.
It was back in 2008 when  bright spark in the Assassins Guild realised that a sword dance (with a beheading at the end) was the ideal activity for any group of self-respecting Assassins.  They planned it before well before the Convention and asked around on the mailing lists for a volunteer musician.
​
This is where Judith Proctor enters the picture:
"As a dancer and musician with Quayside Cloggies, I'd never even heard of longsword dancing, but I was more than happy to pitch in. I brought along my concertina, played for the dance in the Maskerade (it's a bit like a fancy dress competition, but usuallly involves performances as well as costumes) and was duly executed at the end when they placed the sword lock round my neck.
Terry loved it!  He congratulated us on dancing a 'Dark Morris' (fans of his books will get the reference).  I still have the certificate, signed by him, for "Ambition and Achievement in the Field of Folklore".
​
​
I thought that was the end of it...
Two years later, at the next convention, I was cornered by a group of fans who asked me if they could do it again!
There were just a couple of teensy little problems:
1.  Nobody had any actual longswords, we just had a set of little plastic daggers.
2.  I hadn't done or seen any longsword since the last Discworld, and then I'd been playing rather than dancing.
3.  There was nobody else there who knew any longsword, no reference books, and only two really poor quality videos to be found on YouTube.
So, naturally I said yes.
It was fantastic fun. Armed with half an hour's research from the dodgy videos, I cheerfully taught moves I'd never actually danced myself (and didn't know the names of), got them tied in knots, untied, circled, overed, undered, and so forth.
We completed a dance.  I think it even had a lock in it.  It was so much fun that we had two complete sets of dancers.  We performed it in the evening to a large group of fans who absolutely loved it, especially when the second group of assassins successfully stabbed all of the first group in the back!

I was hooked.
I bought a copy of 'Longsword Dances' by Ivor Allsop, which was pretty much the only book available on the subject.
It was like reading complete gobbledegook.  Longsword moves are remarkably difficult to describe.  The problem is even harder when your reader has no dancing experience to help interpret them.  There were no local longsword teams, so no one to ask for help.  I got there - gradually.   Some moves were easy, some took hours or days to work out.  (One I didn't realise I'd got wrong until several years down the line).  I used RPG figures with swords to make mock teams.  I played around with cocktail sticks and bits of Plasticine.  I went through strange gyrations while reading the book on long train journeys and practicing moves in the aisle!
I appealed for swords via an Internet mailing group and several kind people, who no longer needed sets of swords, were kind enough to donate them.

I did longsword workshps at Purbeck Folk Festival, and I did more workshops at Science Fiction conventions, sometimes as part of the main programme (I also did morris and ceilidh workshops) and sometimes with random groups of fans, gathered in an instant, who were rash enough to express an interest.
This group from Discworld 2016 includes a zombie and a member of the Borogravian army (from 'Monstrous Regiment').  I love fans, they come up with the most wonderful costumes. I'm the one at the back in the boring orange and black. (Often I dress up myself, but not always.) 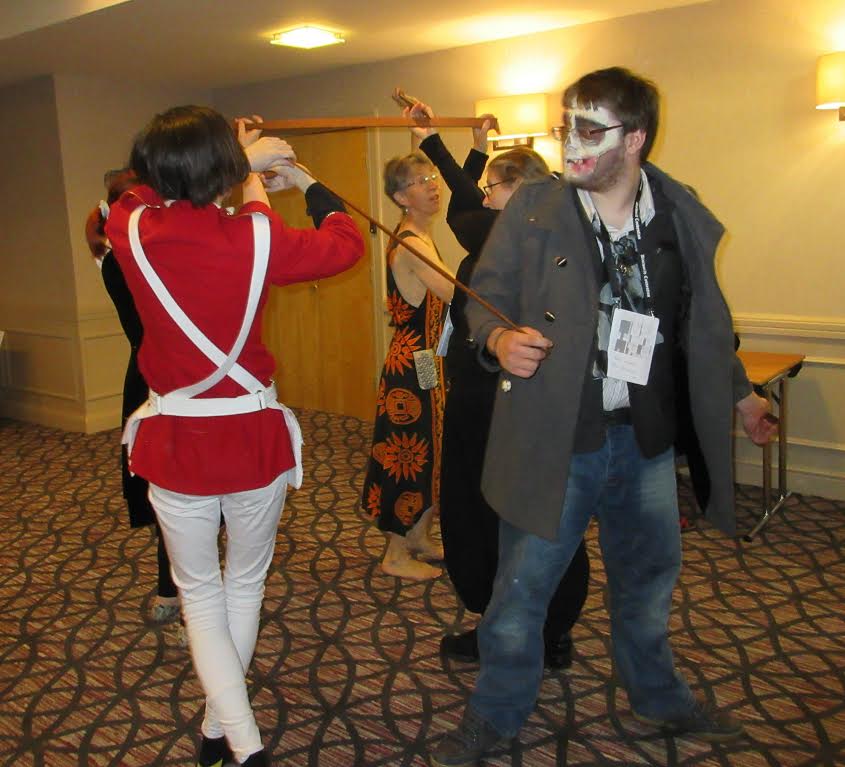 I got involved in organising Wimborne Minster Folk Festival and as part of that, I started teaching longsword in a local school (with the invaluable help of Paul Miles, a retired teacher, who had taught longsword to primary children in the past and still, miracle of miracles, had a set of shorter swords suitable for children.)  They performed, to great applause, at the festival. 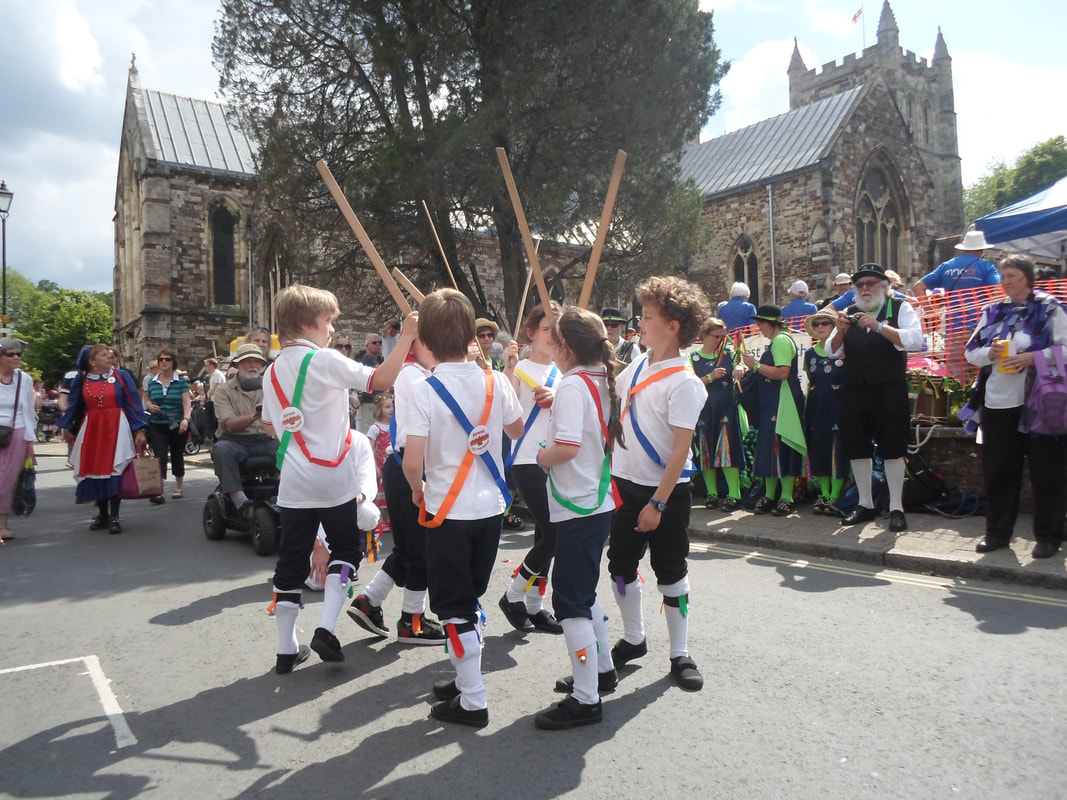 I'd already started Anonymous Morris, a Border morris team, with my son Henry.  That was now well established and beginning to gain a reputation.
I used to take my granddaughter, Owsin, to the toddler group at the local library, and there I met Laura who was there with her son Sam.  Laura was from Yorkshire, and though she'd never seen or done longsword, it caught her interest.  That was the spark I needed to start trying to form a team locally.
In the summer of 2016, I gathered together a collection of friends and held a first workshop in the street outside my house.  Much cheaper than hiring a hall... 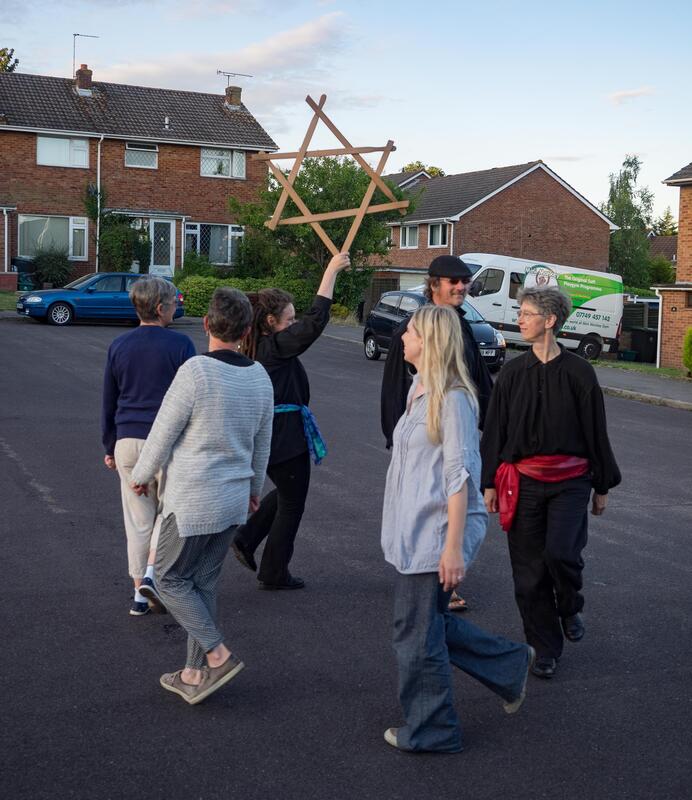 Some of that initial group continued, some were to find the moves incompatible with join problems, some lived to far away to make a regular session, but we did manage to make a start.
I began researching dances in earnest, and settled on the Lingdale tradition as a good one to work with (partly because there was no longer a traditional team performing the dance).
I managed to find a cheap venue in the local library - sword dance teams don't need as much practice space as morris dancers, which does have some advantages.
We chose our costume for cheapness and practicality. Several of us were members of Anonymous Morris, which meant a plain black kit minimised costume changes if we performed together.  Waist sashes were often used by traditional teams and self coloured scarves could be picked up for a couple of quid in charity shops.
In November 2016, we did our first public performance.  Was it brilliant?  No, we were still pretty clunky in the moves, but it was fun and the other teams there were very supportive. 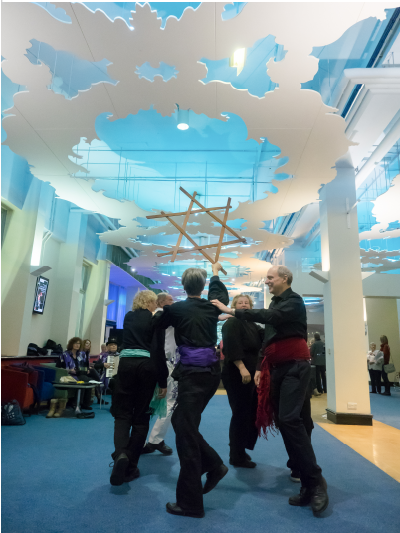 By 2017, with a winter's practice behind us, we were definitely improving, and benefiting from the help of band members from Anonymous Morris.
​Trudy joined us after an online discussion about the practicality of dancing on astroturf revealed that she lived on the next street, and was interested in trying longsword (she already danced Border Morris with Hobos)
Here we are dancing with Anonymous at Wimborne Model Town. 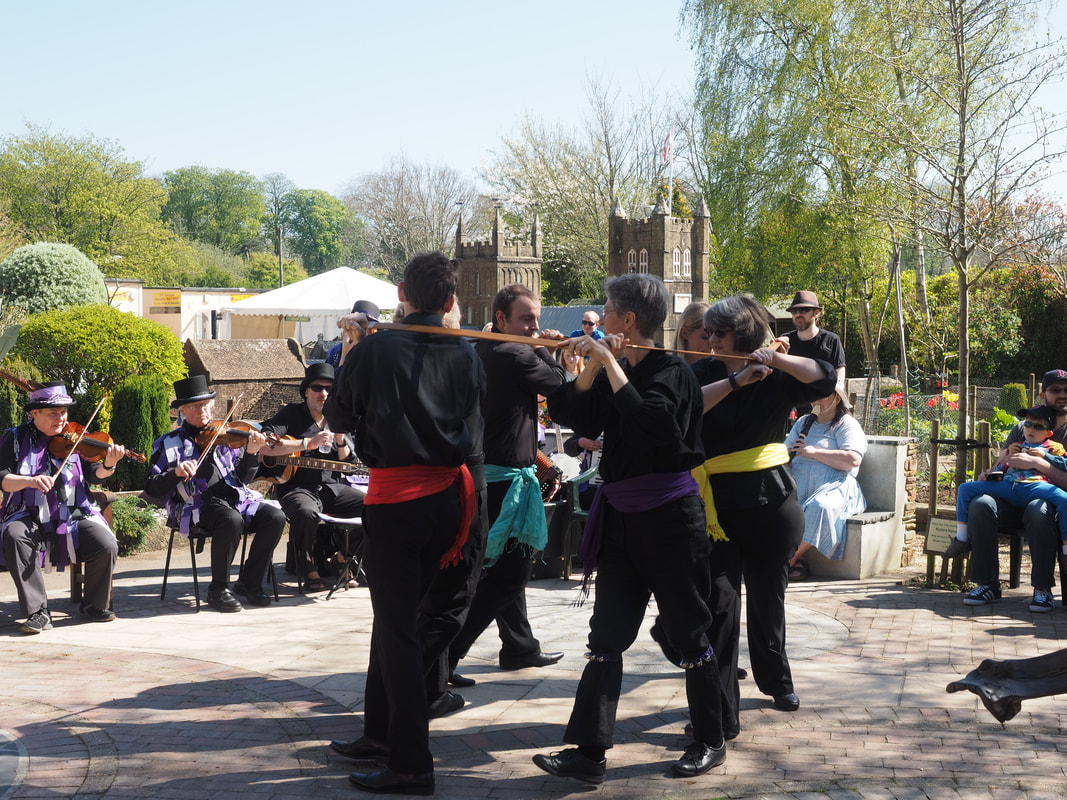 Workshops continued to be an ongoing theme.  My philosophy is that the best way to gain new converts is to give them an opportunity to try the dance. Over the years, I've managed to recruit new members for both my own teams and others via workshops at folk festivals and other events. (So often, the people who are keen, don't live locally, but a new member for any team is still a good thing - I call it 'morris karma'.)
The photo below is from Folk on the Quay, June 2017. 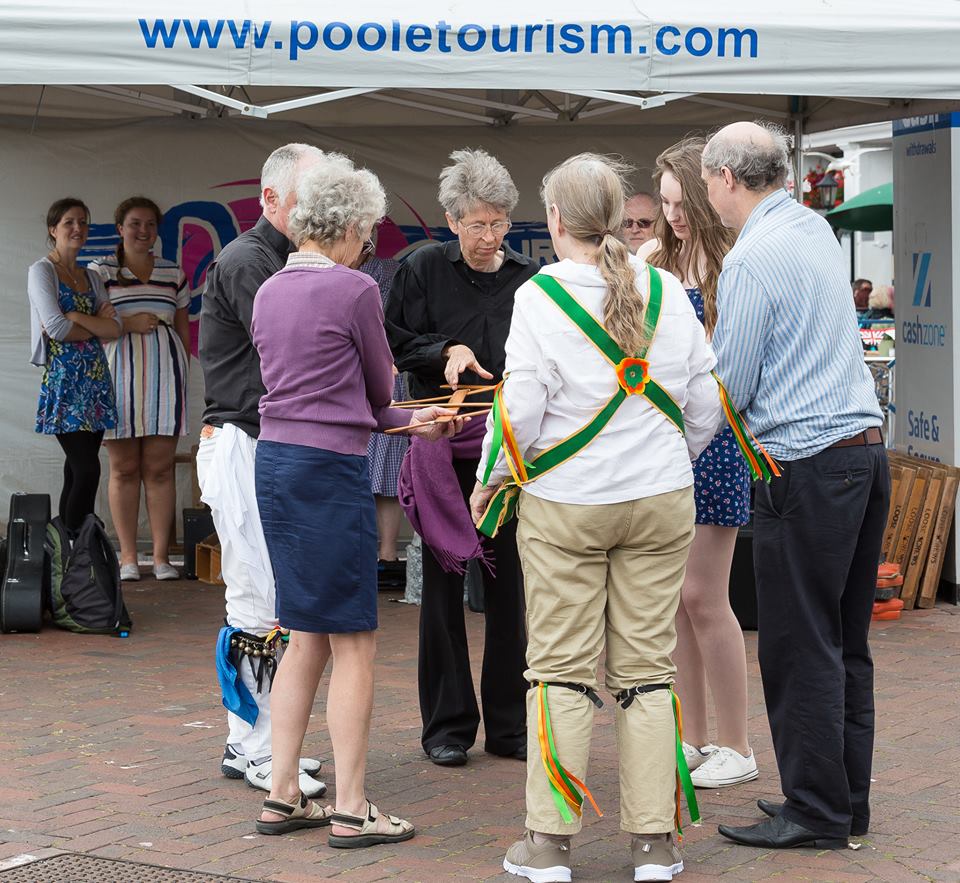 The latter part of 2017 was our lowest ebb as a team.  We lost a number of members from the same family due to transport and time issues.  We also lost most of our regular musicians around this time due to other commitments.  Down to three dancers, and no longer able to perform the six-man Lingdale dances, we had a stark choice:  Innovate or go under.
We innovated.  Oh, boy, how we innovated!  The total lack of any three man longsword dances in the tradition, or indeed anywhere, did not stop us.  We invented move after move, and our standard started improving.
Thanks to Gena, who recorded tunes for us, we were able to continue practicing without a musician.

Early in 2018, we had a lucky break.
Back when my son, Henry, was of school age, he was friends with Rowan, who lived just down the road.  They grew older, Henry went to university, Rowan moved to another part of the country.
One day, Rowan knocked on my door.   "Does Henry still live here?"
"He's out at present," I replied, "but if you're looking for social activities, the morris team meet on Thursdays and the longsword is on Monday."
Not that Rowan had ever done either before, but I'm an evangelist and he looked like he'd make a good dancer.
He did.  A very good dancer.  And it wasn't long before he recruited his mum.
Our dance standard got a lot better, as we were able to manage more regular practice sessions.  In June 2018, we danced at Wimborne Minster Folk Festival (sharing a time-slot with the children I'd been teaching longsword to at Pamphill school - I always like to give children adult role models) 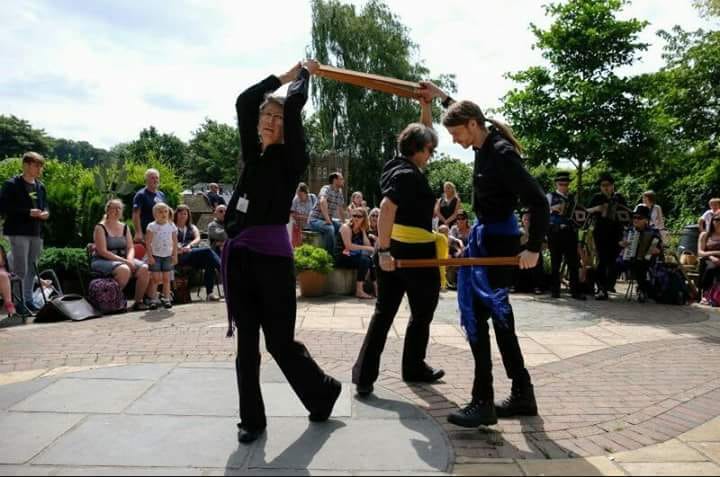 Then, at Christmas, we roped in Rowan's sister, Jackie, to be ritually executed in our mumming play.  After that, she joined the team as well.
2019 was even better. With the extra dancers, we added a four man dance to to active repertoire, and added more figures to the three-man dance.
I gently twisted Anne's arm and she joined us as a musician.
​We were finally able to sign up for events like Folk on the Quay and Swanage Folk Festival, and start dancing out with other morris teams.
At Winchester Mayfest, we were unable to perform, as I was recovering from a badly sprained ankle.  I asked the organisers if they would like us to run workshops instead of performing, so that they wouldn't be left with a gap in their programme.
They liked the idea, we ran some fun workshops, and recruited Gilly into the team as a direct result.
We did a workshops with a local scout group (recruited a really good young dancer, but he had to leave after a couple of months as his new school wanted him to learn Latin on Monday evenings), ran a children's dance workshop at the library in the holidays, recruited Sue after Folk on the Quay - Morris karma always comes back to you in the end.  Several years ago, I persuaded Sue's daughter to join a morris team in her local area.  They'd been invited to dance at Folk on the Quay and it was great to meet up with her again.  She recommended me to her mum, and the rest is history.
With seven dancers and things looking bright, we decided it was time for a costume change.  Something a bit smarter and more individual than the sashes.  Taking a leaf from the book of North British Sword, we opted for individual waistcoats.  Shortly after making (but not actually doing anything about) this decision, we were performing at Gold Hill fair, where, as luck would have it, someone was having a sale of vintage waistcoats.  About an hour later, we were all dancing in our new kit!