This dance was created by Andrew Kennedy of North British Sword, although other teams have since adopted it and developed their own versions.
For five dancers.  This dance uses a light running step for everything except the walk-on.  All figures progress anti-clockwise.

​The music we use is "Captain Lanoe's Quick March".  It's a 24 bar tune, played continuously (AB).
Many of the figures in this dance don't have a precise length that fits to the music. With a 5 man dance, you're unlikely to get a tight fit to anything.  This may also be why the dance  has a circle before any new figure, as circles are great for evening out timing. 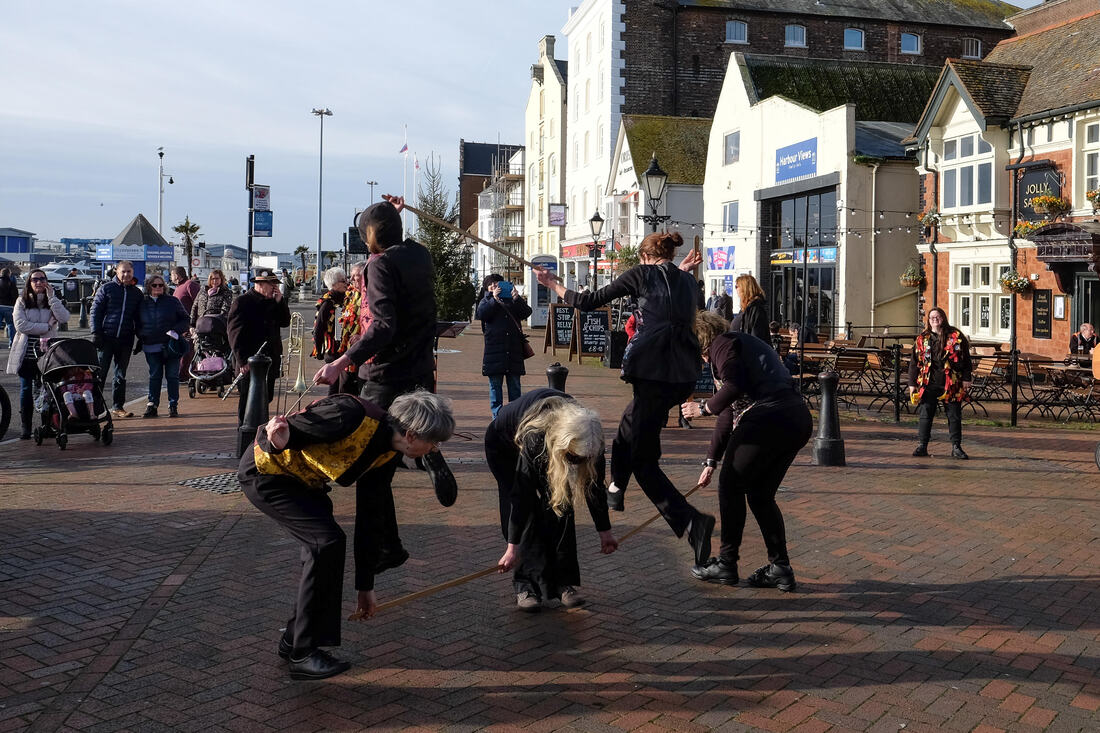 Walk On (no music)

Stand in straight line with swords touching the ground.  Numbering is along the line, so number 1 leads with two behind, etc.) Number one counts 4, 3, 2 ,1 and everyone starts at the same time on the left foot.  There is no music.  Number 1 uses 16 steps (counting for the team to hear, but not loud enough for the audience) to lead the line into the centre of the dance area and turns right to form a tight circle with swords touching the ground in the centre.
Everyone stands still.
Number 1 has four counts to raise his sword out and up to the centre. Each dancer in turn (a/c) brings their sword up to a high touch, making sure their sword goes under the previous ones.
Pause and wait for the music.

Clash and Circle
From this point onwards the dancers do a gentle run.

Music starts the tune, no intro required.  On the 9th beat, the dancers high clash their swords once and lower them to form a ring.
Continue the circle to the end of the tune.  Number 1 needs to manipulate the circle so that he is closest to the audience when 'cast left and right' starts, as this will ensure the figure flows towards the audience.

Number 1 casts left (anti-clockwise). Note this is a cast, it is not a single under, you won't be holding your swords tightly together when you cast.
Number 2 does the same, but goes to the right ( clockwise).
Each dancer does the same in numerical order, alternating direction.   To maintain the alternation, dancers will cast the other way when the come to the top again.
The dancers go half way round the set (making sure not to pull the set too far backwards) and then come up the centre.  It's important  for the dancers to form a line in numerical order as they come back up the middle of the set. Forming a line keeps the set tight and makes it possible for those casting to be able to get round without needing elastic arms.
Number 1 does four casts, but after his final cast, everyone else simply comes up the centre and flows out into a ring. As number one goes into this final cast, he should call "Circle."

Starting at the beginning of a suitable phrase in the music, number 1 lets go of his left hand sword, which 5 can wave in the air and then rest on his shoulder.  Continue circling for a while and the 1 calls 'In'
The rest of the dancers start a 'forward for 4 steps (ie. the line passes over number 1 for a count of four, as he is going under it for a count of four), then backwards for 4 steps' pattern, while number 1 leads a line of dancers weaving in and out of the line.
As the line goes forward for the first time, number 1 turns clockwise and goes under his own RH sword.
As the line comes back again, he leads under number 2's sword, followed by number 2.
Next, as the line goes forward, he goes under 3's sword, followed by 2 and 3.
The he goes under 4's sword as the line come back again.

Now he leads the line into a circle. (making sure it's in the centre of the dance spot).  If the last pair arch over the set and move along it, this also helps the set get back into position.

Over Two Swords (Twos and Threes)
This move is done with the swords linked in a ring.
Number 1 forms a line of three with himself as the centre.  These three lower the two swords held between them and sweep the swords down while moving forwards.  The other two dances move forwards and jump over the swords.
The trio now form a tight triangle with the dancers to either side of number one coming together shoulder to shoulder.  Number one falls in behind them, both swords held together.
The trio move backwards, going under the sword raised by the other two dancers.
This gets everyone back into the ring.
If there is left-over music (and there will be if the move is done at a decent speed), then use the spare music to go round clockwise.  Aim for four steps to go over the swords, four to go back under and four circling.

Over Neighbour's Sword
Starting with number one, each dancer will do the following: turn in, lift left leg over the sword in his left hand, followed by his right leg (done with the legs straight if possible), lift right hand sword over his head to enable him to reform the ring.  This can be done in six counts by the able-bodied.  Two counts for each part of the move.
The move progresses anti-clockwise with each dancer going over their sword in turn.  Try and keep the circle rotating clockwise while this is happening.
Any dancers who aren't flexible enough to go over a high sword, simply pass and their action is done by the next dancer who is comfortable with the move.
​
Chorus

Windows (through the door)
Number one lowers RH sword and raises LH sword. Number 2 goes over the lowered sword (from outside to inside - this will require crouching down) and then assists number one in keeping the sword lowered for the other dancers.  The rest of the dancers follow number 2 over the lowered sword and under the raised one, reforming the ring and circling for 4-8 beats (depends on how quickly/smoothly you manage to reform the ring!).
Move progresses A/C with each dancer raising and lowering their swords in turn.

Flip Circle Inside Out.

Number 1 turns out (as in a single under, but with only the left hand sword held high) and goes anti-clockwise round the set pulling the other dancers under the arch after him.  This has the result of turning the ring inside out.  Circle facing out until end of phrase.
Number 2 casts out clockwise (with only his RH sword held high), followed by everyone else.  This turns the ring right side out again.  Circle until end of phrase.
Number 3 casts anti-clockwise. (then as above)
Number 4 casts clockwise.  (then as above)
Number 5 casts anti-clockwise.
Number 1, followed by each dancer in turn (going clockwise round the ring) does a turn a/c to face into the centre of the circle, bringing his right hand over left to start forming the sword lock.
Keep circling while the lock is being formed.
When the lock is completed and pushed tight, number 1 raises lock and continues round circle until he is in the right position to form a line facing the audience, with himself in the centre (this will require number 3 to break the circle first).  Keep maintaining time in the line and then number 1 leads dancers off in a 'flying goose' formation.